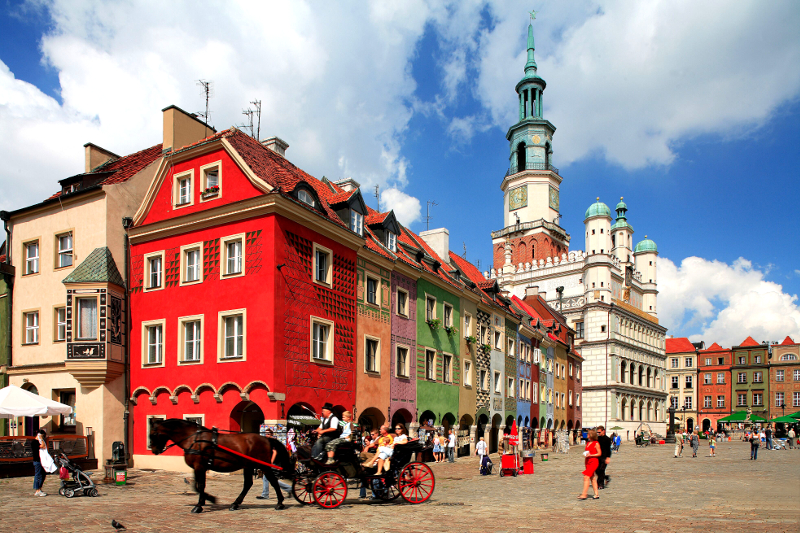 Since 1991 is one of the most important artistic events in Central and Eastern Europe, an international program presents theater, music, dance and film. The name comes from Lake Malta located in Poznan. The festival was created in order to create the opportunity to present the open-air theater and other artistic events.

"Life is what interests us - its astonishing capacity for rebirth and flourishing anew. The Festival is an unending celebration of Jewish life". Krakow, Kazimierz - the symbol after the war of Jewish absence, it has again become a place of Jewish presence. The mirror of the Festival reflects the diverse beauty of Jewish culture.

St. Dominic's festival is an open-air shopping and entertainment event. The oldest, most famous and biggest in Poland and one of the largest in Europe. Its tradition dates back to the thirteenth century, when Gdansk Dominican monastery fathers received from Pope Alexander IV the privilege of granting indulgences, on the day of their founder.

Is an open-air shopping and entertainment event with main attraction - polish dumlings. Event takes place at small market square. During the festival competitions prepare best dumplings which are rated by both the audience and the professional jury.

Now attracts ensembles from different countries and continents, wishing to stand in the competition of the most important trophy ‘Golden Highlanders Axe’. An unique event which attracts crowds of fans to spend time with highlanders from different corners of the world and experience folklore adventure.

This is where the most famous and worldwide recognizable ceramic dishes are being created. The tradition is celebrated every year, always in the second half of August. This is the biggest event of the region, which promotes Boleslawiec and ceramics not only in the country but also in Europe and in the world.

Is the premier event of the region, awarded two certificates of Polish Tourist Organization - "The best tourist product". During the feast takes place a whole range of cultural and sporting events such as the Night Run Bacchus, concerts of pop music, as well as brass bands, big - bands, symphony orchestras, theater performances, exhibitions.

Is a regular feature of the city’s festive season, where you can buy a wide range of varied Christmas decorations, gifts, toys, sweets and other foods, nutritious dishes alfresco and/or help oneself to mulled wine. Another attraction is the occasional free entertainment, usually provided by children ensembles and village artists performing carols.

Inquiry form
We suggest to fill the inquiry form to help us prepare the best tailored offer for you. Our consultants will answer within 24 h.